Variant cover is the same as the regular cover except X-51 is against a white background with a purple number one in a circle over his shoulder. 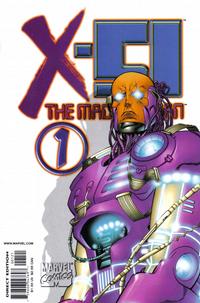 The Persistance of Memory (Table of Contents: 1)

Genre
superhero
Characters
X-51 [Aaron Stack; Machine Man; "Jack Kubrick"]; Dr. Haines (1st appearence); Abel Stack (cameo); Senator Miles Brickman; General "Kragg" Kragoski (all characters associated with X-51); The Brotherhood of Evil Mutants [Mystique; Blob; Toad; Mimic; Post]; Peter Henry Gyrich; Sebastian Shaw
Synopsis
Special Agent Jack Kubrick is given the assignment of finding out what happened to Machine Man after his last public appearance. This includes interviews with people who knew him. He also finds that the Brotherhood of Evil Mutants is also looking for Machine Man, for their own reasons. After finding Machine Man's head, Jack is fatally shot by Mystique. Still alive, Jack puts the robotic head where his head had been, only to discover that he is Machine Man.