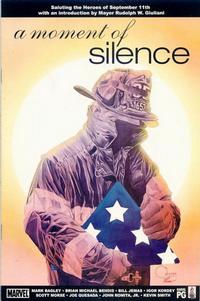 [Since September 11th, New York City has been called a City of Heroes.] (Table of Contents: 1)

Introductory text with cover credits and indicia information on the inside front cover.

Moment of Truth (Table of Contents: 2)

Moment of Silence: A True Story (Table of Contents: 3)

Synopsis
A comic store owner and volunteer fireman tells his story of traveling to New York to help in the rescue effort following the events of September 11, 2001.
Reprints
Keywords
tribute

Synopsis
On the morning of September 11, a family is terrified at the events unfolding until they are reunited.
Reprints
Keywords
tribute

[When asked to explain why Marvel chose to do a wordless tribute...] (Table of Contents: 6)

[Thor and Fireman] (Table of Contents: 8)

A lithograph of this image could be purchased from www.dynamicforces.com.

A lithograph of this image could be purchased from www.dynamicforces.com.

Synopsis
A fireman reflects on the events of September 11th.
Keywords
tribute

Illustration on the back cover with text on contents of this issue.