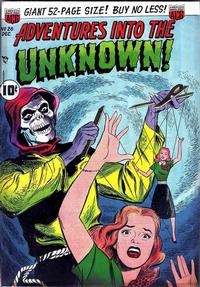 The Phantom Seeker (Table of Contents: 1)

Genre
fantasy-supernatural; horror-suspense
Characters
Ted Warren; Madge Donald; Olivia
Synopsis
Ted joins Madge on a train but finds she is haunted by a phantom. Together they reunite the phantom with his lost love.
Keywords
Ghost; Train

The Ghost Train (Table of Contents: 3)

The Holland Haunt (Table of Contents: 4)

Genre
horror-suspense
Characters
Peter Van Nostrand; Brian; Anna Van Nostrand; Arnold Van Nostrand
Synopsis
Peter returns home to find his uncle dead and his cousins living in his estate. Their attempts to bump him off and secure his inheritance are thwarted by the ghost of a long-gone relative.
Reprints

Wizard of Evil (Table of Contents: 6)

Nemesis of the Living Dead (Table of Contents: 7)

The Werewolf Burial (Table of Contents: 8)

The Saga of the Sorceress and the Stag (Table of Contents: 9)

The Haunted Ghost (Table of Contents: 10)

Genre
horror-suspense
Characters
Nancy; Phil Chapman; Mike
Synopsis
A ghost from the 4th dimension is haunted by a creature from the 5th dimension and brings the beast to our world, the 3rd dimension.
Reprints