On sale date from the publication date found at the Catalog of Copyright Entries, Part 3, Periodicals, New Series, Volume 35, 1940, Number 3. Class B periodical. Copyright number B 460880. 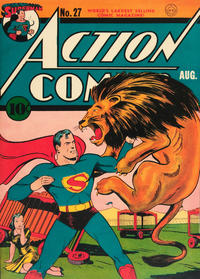 First Line of Dialogue or Text
Heartless criminals exploit the helpless and unfortunate!
Genre
superhero
Characters
Superman [Clark Kent]; Lois Lane; Mr. Tweed (villain); Mrs. Tweed (villain); Davey Merrill (villain)
Synopsis
Clark arrives for a date with Lois, who is making a donation to the Brentwood Rehabilitation Home. Clark tells her that the place is more interested in money than their young charges. Lois decides they should visit the home so that she can disprove Clark. After a pleasant visit, Lois and Clark are stopped by a charge, Davey Merrill, who cut his hands climbing the wall just to ask for something to eat. Once they feed him, he tells them all about the horrible conditions at the home.
Reprints

Genre
adventure
Characters
Pep Morgan; Bill; Cole; Coach Jones; Sheriff Blake; Villains: gamblers
Synopsis
At Maddon Circle Garden, Pep prepares for the Annual Foxx Quarter-Mile Race for Ardale College. In the locker room, Pep overhears gamblers bribing a runner. In the race, he is beat by Cole from State. Later, Pep and Bill find spike marks on the track. He decides to wait for the outdoor quarter to best Cole when spikes are allowed, but the gambler's plan was to get all bets on Cole so Pep could win the outdoor. When Cole is hurt in a train wreck, the gamblers have to deal with Pep.

[Fight to the Finish] (Table of Contents: 6)

Genre
historical
Characters
The Black Pirate [Jon Valor]; Jeanne; Captain Ruff's brother (villain); Captain Tavish; a ship dealer; Captain Angago
Synopsis
Hearing Jeanne scream, Jon Valor rushes to protect her from a bearded giant, Captain Ruff's brother. Once safe, they head for Savannah and passage on Captain Tavish's ship. They retrieve Ruff's treasure and head to Bristol and buys the Sea-Queen. The dealer visits a friend, Captain Andago, who tells him that the money he received was the lost jewels of Queen Maria, and the man who bought the ship is a pirate with a price on his head.

Story title given in previous issue.

No Greater Courage (Table of Contents: 7)

[The Blue Raider] (Table of Contents: 8)

The Return of the Gorrah!! (Table of Contents: 9)

Genre
adventure
Characters
Tex Thomson; Bob Daley; The Gorrah (villain); District Attorney Maloney; Janice Maloney; Tiger Dixon; Bomber Brennen; Reb Horton; Rat-Men (villain); Miss X (cameo)
Synopsis
Bomber Brennen is killed in a boxing match with Tiger Dixon that Tex, Bob, the D.A., and the D.A.'s daughter, Janice, were attending. Bob discovers a sponge loaded with nepthogas in the locker rooms. Dixon's manager, Reb Norton, notes that Joey Gonomi had tried to make him throw the fight, but after the lights go out and some shots are fired, Reb disappears. Tex receives a package from a florist, and he and Bob investigate, aided by Miss X. They end up captured by the Gorrah and his new creations, the Rat-Men.

Genre
adventure
Characters
Clip Carson; Buzz Bailey; Snyder; Mr. Dennis (villain); Archie Norton; Jean Norton
Synopsis
On a plane to Hollywood, where Clip will act as technical advisor on an adventure film, he runs into Buzz Bailey. Buzz is greeted by a shady producer, Snyder, but ignores him. Clip sets out to location with Archie Norton, the star of the film, and Archie's wife, Jean, but the couple fights incessantly. On the first day of shooting, Archie is shot dead, and Clip determines to find the killer.

The Vanished Explorer (Table of Contents: 17)

Genre
adventure
Characters
Zatara; Tong; Raoul D'Armand; Kara; The Link Men (villains); Ahmed the Great (villain)
Synopsis
On the trail of the "missing link," Raoul D'Armand was lost in the jungles of Africa. Hearing of the news, Zatara sets out with Tong to find him.