A variant of this issue was printed for distribution in the UK with local advertising on the back cover. 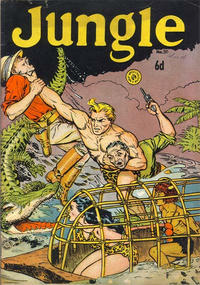 First Line of Dialogue or Text
This is the story of a man who flew from our carrier...
Genre
war
Reprints

IV: The Parting (Table of Contents: 4)

Genre
horror-suspense
Synopsis
A ventriloquist's dummy refuses to allow Russell Burke to abandon him for a new wife.
Reprints

The original printing of this story was in Jumbo Comics (Fiction House, 1938 series) #72 (February 1945). This reprint version from Ghost Comics has been extensively rescripted. The story was originally 9 pages and untitled. The omitted material is panel 1 from p. 2; panels 3, 4, 5 & 6 from p. 4; and panel 3 from p. 5. The reworking is crude—for example, the outline of a curved panel in the top tier of page 2 still visible at the left of the second tier as the two panels used to be side-by-side. Some of the changes suggest post-Code editing: a portion of a panel on the original page 3 and the script for that page have been edited to remove reference to a murder. Similar changes are made throughout. The "IV" on this Australian reprint makes no sense as it originally marked the fourth story in the issue of Ghost Comics.