A version of this comic was prnted for the UK market with a local advertisement on the back cover (Body Sculpture Club, 102/7 Success House, Surbiton, Surrey). 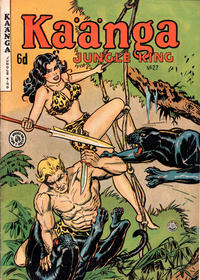 This version of the story from Kaänga Comics 14 has two pages edited out, significant text changes (almost completely rescripted), and Celardo's signature removed. The material removed includes two panels from the original p.6 (the page number still exists in the middle of the page where the tiers have been realligned), two panels from p7, four panels from p.8 (with the rest move earlier in the reprint, five panels from p.9 (only one panel remains), and one panel from p.10.

First Line of Dialogue or Text
… I was delighted to get the school teacher's position...
Genre
fantasy-supernatural
Synopsis
Drew is invited by Sally to prove a mill isn't really haunted, but once he gets snared by the hoods using the mill as phony ghosts, he finds real ghosts who help him turn the tables.
Reprints

This reprint ends with the promo "Ghost Gallery every month in Jumbo Comics!"

First Line of Dialogue or Text
There was good fortune to be found at the old ruins...
Genre
jungle
Reprints

The Animal Question (Table of Contents: 4)

The Curse of Kintu (Table of Contents: 5)