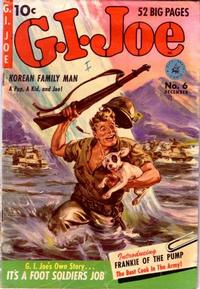 First Line of Dialogue or Text
A kite used by the army...
Genre
non-fiction; war
Synopsis
Six facts about armies (facts on kites, land mines, howitzers, tanks, and fuel) and the indicia.

Genre
war
Characters
Joe Burch; Sergeant Mulvaney; Sam Daily
Synopsis
Sam Daily, a new war correspondent, learns what it is really like to be at war.

Frankie of the Pump! (Table of Contents: 4)

Genre
humor; war
Characters
Whitey Hicks; Windy; Basil Q. Murgatrod
Synopsis
Whitey and Windy tour Basil Murgatrod, the Mayor of Flatville, around the base and almost get all of them killed.

Dan DeCarlo ? credit from Jerry Bails' Who's Who and comparison to his later work at Archie.

The Corporal's Tree (Table of Contents: 9)

Genre
war
Characters
Joe Burch; Tony Carpuccio
Synopsis
Corporal Carpuccio strives to protect a tree from the enemy and from his own fellow soldiers.

Genre
humor
Synopsis
A soldier trudges in from the front to go to a dance, but quickly has to go back.

The Garand Rifle (Table of Contents: 11)

Our Army and its Weapons / comic story / 1 page (report information)

[Soldiers Marching Up a Hill] (Table of Contents: 12)

Genre
war
Synopsis
Back cover of comic. Heavily inked drawing of soldiers walking up a hill into the sunset.