On sale date as given in the copyright application as listed in the Catalog of Copyright Entries, Periodicals, 1977, page 477, registration number B167982. Copyright renewed by Marvel Comics Group, September 27, 1976, renewal number R684236.
First issue with Marvel red circle colophon on cover.
Some information for this issue from Tom Lammers via the Timely-Atlas list, September 2010.

First Line of Dialogue or Text
I Don't Care If You Did Vow Never To Speak To Him Again!
Genre
humor
Characters
Patsy Walker; Buzz Baxter
Synopsis
Buzz has mailed himself to Patsy. 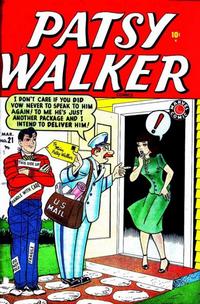 The Bully (Table of Contents: 3)

Job Number
3916
First Line of Dialogue or Text
This toaster shoots the toast up too high!
Genre
humor
Reprints

Signed with "man" character after "Kurtz."

Patsy reads The Merchant of Venice by William Shakespeare (1600).