This issue is a variant of Secret Origins (DC, 1986 series) #2 [Direct]. There exist further variants. 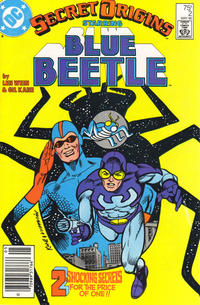 Echoes of Future Past! (Table of Contents: 1)

Job Number
S-4772
Genre
superhero
Characters
Blue Beetle [Dan Garrett] (death); Blue Beetle [Ted Kord]; Luri Hoshid; Kha-Ef-Re; Jarvis Kord; Mr. Thunderbolt (cameo); Mentor the Magnificent (cameo); Praying Mantis-Man (cameo); Red Knight (cameo); Magno-Man (cameo); Mister Crabb (cameo)
Synopsis
Archaeologist Dan Garrett enters the Egyptian tomb of Kha-Ef-Re and finds a sarcophagus with a blue scarab on it. When he touches it, the spirit of the pharaoh tells him he will have the power of the Blue Beetle when he says the words: Kaji Dha. Several years later, Garrett's former student, Ted Kord, asks for help in stopping his uncle Jarvis who is building an army of destructive robots. After Garrett apparently dies during the fight, Kord vows to carry on as the next Blue Beetle.
Reprints

Ties together the two Charlton characters. This serves as the introduction to the Blue Beetle's new book.

Job Number
S-4790
Synopsis
The story behind the multiple Blue Beetles and how he was re-introduced into the DC universe.

Also includes previews of the covers of issues 3 and 4.