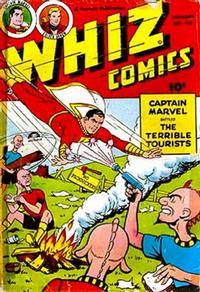 The Terrible Tourists (Table of Contents: 1)

The Hitch (Table of Contents: 5)

The Race to Doom (Table of Contents: 6)

Art similar to credited work by Ramsey in issue #136.

The Duel of Vengeance (Table of Contents: 7)

The Ghost Ship (Table of Contents: 8)

Genre
superhero
Characters
Ibis the Invincible; Taia; Santa Claus's reindeer; Nanoki
Synopsis
When an ongoing story on the legend of the Ghost Ship threatens to break up another date between Ibis and Taia, Ibis teleports them both to the ship so that Taia can get her story fast and still make their dinner date.
Reprints

The artwork is very similar to signed Walter Palais stories in Planet Comics (Fiction House, 1940 series) #53, like hands, faces, lines inside the ears, and figure movement, and it is very probably his work.