This cover is printed upside down and is actually back cover of magazine. The sequences are indexed in order from the apparent "back" cover to this "front" cover. Indicia is printed on reverse of "back" cover. 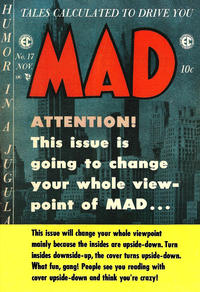 The Book Club of Tomorrow Is Here Today! (Table of Contents: 1) (Expand) /

Bringing Back Father! (Table of Contents: 3)

Drawn in 2 different styles by the 2 different artists: odd pages in the cartoon style and even pages in a more realistic style where Jiggie is shown to be severly injured by Maggs's constant violence.
Script credit from Tales of Terror: The EC Companion.

Game show style loosely based on "What's My Line?" First page is photo of Senate subcommittee.
Script credit from Tales of Terror: The EC Companion.

Genre
satire-parody
Synopsis
Appears to be an excerpt from some history text.
Reprints

Gag is that this is the small countries' viewpoint, and type is very tiny. In fact it's almost unreadable and indexer is uncertain of title. Dra it is (but you have to use a magnifying glass to read it).
Script credit identified in The Mad Archives (DC, 2002 series) #3.

Genre
satire-parody
Synopsis
A collection of drawings of grotesque women entered in the Miss Potgold of 1955 contest.
Reprints

First page is a parody of a Rheingold Beer ad with Bill Gaines in the photo.
Script credit from Tales of Terror: The EC Companion.

The titles of MAD and 11 competitors are used in the narrative on the first page: Bughouse; Crazy; Eh!; Flip; Get Lost; MAD; Madhouse; Nuts!; Panic; Riot; Wild; Whack. This page is a setup for the following story (intro and main story are consecutively paginated).

This Issue Is Going To Change Your Whole Viewpoint of MAD... (Table of Contents: 12)