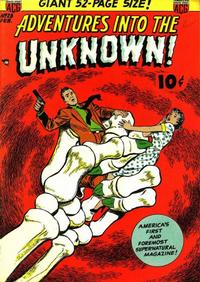 The Vampire's Prey (Table of Contents: 1)

Characters
Bob Dexter; Trudy; Sangrini; Dudley Vernon
Synopsis
The doctor who invented an artificial blood was murdered in a locked room. Who or what could have done it?
Reprints
Keywords
Vampire

The Visitor (Table of Contents: 2)

Demon of the Devil (Table of Contents: 3)

The Specter's Revenge (Table of Contents: 6)

Story is initialed by a extremely stylized mark, apparently a KW.

For Startling Supernatural Stories, it's the Terrific Trio! (Table of Contents: 7) (Expand) /

The Hideous Head (Table of Contents: 10)