Newsstand cover has barcode and no cover enhancements. 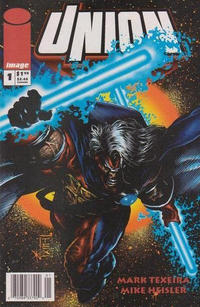 The Modern Icarus (Table of Contents: 2)

First Line of Dialogue or Text
Welcome to Union!

Mike welcomes readers to the book, tells of the letter column name contest and list some last minute credits missing from the credits page.

The Maxx / promo (ad from the publisher) / 1 page (report information)