This issue is a variant of Hanna-Barbera Scooby-Doo...Mystery Comics (Western, 1973 series) #28 [Gold Key].

The Ancient Astronaut (Table of Contents) 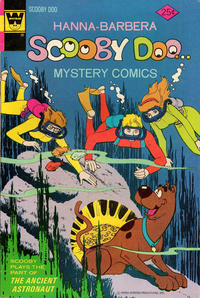 The Ancient Astronaut (Table of Contents: 1)

Genre
humor; detective-mystery
Characters
Scooby Doo; Shaggy; Velma; Daphne; Fred; Mr. Hadley
Synopsis
Scooby and the gang are at the Museum of Ancient Art when an Egyptian sarcophagus begins to cough and smoke. The curator, Mr. Hadley, arrives to extinguish it, but it turns out to be a self-destructing tape recorder. Meanwhile, thieves have made off with an Axtakl artifact called the Ancient Astronaut. Clues point to the thieves returning with the artifact to Axtakl, so the museum offers to fly the gang down to Central America to retrieve it.
Reprints

This story is slightly shorter than was customary for Scooby Doo Mystery Comics at the time, and also the only new story not written by Mark Evanier since he began writing this series. According to Evanier, "Someone else had written a SCOOBY script for a MARCH OF COMICS special Gold Key planned to do. Then they changed their minds and didn't do that special issue so the story was stuck into the regular SCOOBY comic."

The colorist mistakenly colored Fred's hair light green (the same color as their diving suits) in the last two panels of this story.

Curse of the Wishing Well (Table of Contents: 2)

Characters
Scooby Doo; Shaggy; Velma; Daphne; Fred; Jackie Jacobs; Munger; Gruber
Synopsis
The gang decides to volunteer for Jackie Jacobs' World Children's Fund Telethon. The money collected is dumped into a genuine Scottish wishing well, which is supposedly cursed by a demon. The money, of course, falls through a trap door in the floor and is collected in the basement. While Shaggy tries to get Scooby to perform his trained dog act, two thugs, Munger and Gruber, prepare to steal the money when it hits $250,000.
Reprints

An older Jackie Jacobs appears in Crossfire #1, page 5 (also by Evanier and Spiegle).