This issue is a variant of Secret Origins (DC, 1986 series) #18 [Direct]. There exist further variants. 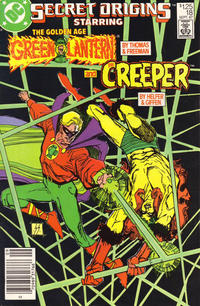 Before and After Science (Table of Contents: 1)

Job Number
G-2981
Genre
superhero
Characters
Creeper [Jack Ryder]; Moe; Manny; Emil Yatz
Synopsis
Jack Ryder is captured by a mob boss, drugged, shot and left for dead. He is brought back to life by Professor Yatz but the process has created the Creeper.

This origin, although based on the original Showcase tale, stresses that the Creeper is not quite sane.

The Tale of the Green Lantern (Table of Contents: 2)

This is based on the stories in the early All-American Comics, but does include the continuity of the Guardians, and their creation of the Starheart as shown in Green Lantern circa #115.