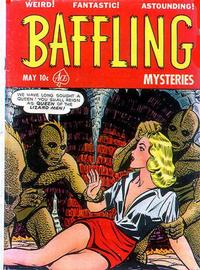 Genre
horror-suspense
Synopsis
Husband becomes curious about the lifelike male dolls kept by his beautiful young wife -- and why one of them talked to him. Lucretia is a witch dabbling with the secrets of the "Australian bush country head-hunters".

Genre
horror-suspense
Synopsis
"One spring day in 1912, Richard Wentworth an American business man, checked in at a well known hotel in London ..."
The ghost of a burning man warns Wentworth that the hotel is on fire. The building can be safely evacuated with no one getting harmed.

One of a series of 1-page stories about supposedly true encounters with the supernatural.

Genre
horror-suspense
Synopsis
"History tells us of the murderous career of Lucrezia Borgia who was one of the most feared women of Italy..."
Actors rehearsing a play at the Borgia palace in 1933 are attacked by the ghost of Lucrezia.

One of a series of 1-page stories about supposedly true encounters with the supernatural.

At the Sound of Airi's Drum (Table of Contents: 5)

Genre
horror-suspense
Synopsis
Small-time punk kills a shopkeeper in Calcutta, then conjures up a mystical being using the drum that he stole from his victim. The drum's "djinn", Airi, grants him three wishes. The man's last wish is to be hidden from the police. Airi takes him down with him to his "fiery underworld domain".

Artwork appears to be by Lou Cameron but is unsigned.

The Glacier's Secret (Table of Contents: 6)

Genre
horror-suspense
Synopsis
A pilot goes down on a glacier. He finds a cave and frozen viking warriors therein. By making a fire they come alive. The pilot is imprisoned but can escape.

Genre
horror-suspense
Synopsis
Explorers in Sumatra encounter a race of belligerent lava-men. They can be rendered harmless by contact with water, of course.