Some information for this index from Saltarella via the GCD Error Tracker, August 2010. 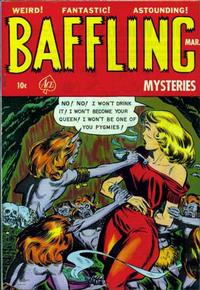 The Dead Are Never Lonely (Table of Contents: 1)

Genre
fantasy-supernatural
Synopsis
Actress Nolita is killed in an argument with her husband. She flees the crypt, hoping to escape death. As her body withers away in the world of the living, she returns to death and finds peace with her late husband.
Reprints

Genre
horror-suspense
Synopsis
"There is a man today, in Spain, who has in his possession two macabre paintings..."
People die gazing upon paintings of horror.

Prowl of the Stalking Terror (Table of Contents: 3)

Genre
horror-suspense
Synopsis
A surgeon believes in vampires. To prove his theory he drags his uncle from the crypt who was a vampire! The bloodthirsty vampire rampages through the hospital and infects his nephew. After more killings, the surgeon overcomes his vampirism by means of a blood transfusion and both uncle and nephew fall struggling with each other out of a window to their death.

Genre
fantasy-supernatural
Synopsis
"On the desolate coast of Nova Scotia, there stands a lighthouse..."
All lighthouse keepers vanish. Two tourists staying the night find out that all of them cruise the sea at night - in a rowboat.

Genre
horror-suspense
Synopsis
The sculptor Clatrow forms voodoo dolls out of graveyard clay. Ridding himself with this mystic power of his mentor, Clatrow plans to marry the daughter of the house. Visions of the murdered man haunt Clatrow, he breaks his own voodoo image by accident and dies.

The Curse of Bell's Rectory (Table of Contents: 6)

Genre
horror-suspense
Synopsis
A treasure hunter digs up gold and silver in the well of an old rectory. The deacon's ghost (to whom the treasure belongs) appears and kills the thief.

Slaves of the Orchid Goddess (Table of Contents: 7)

Genre
horror-suspense
Synopsis
In the jungle of Bengali, two adventurers encounter the orchid goddess and her man-eating orchids. They escape to the new world, bringing along a small plant. As it grows, it turns their florist business into a little shop of horrors.