Both the Garney and Pacheco covers have the same UPC number.
This issue is a variant of Wolverine Weapon X (Marvel, 2009 series) #5 [Garney Cover].

Both the Garney and Pacheco covers were distributed in a 50:50 ratio. 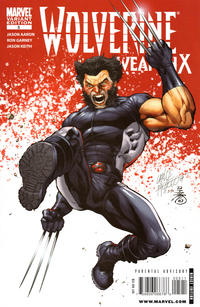 First Line of Dialogue or Text
You finally awake?
Genre
superhero
Characters
Wolverine [Logan; Patch; Weapon X; James Howlett]; Christopher North [Maverick] (guest); Gertrude Jacks (guest); Strikeforce X (villain); Norman Osborn (cameo); HAMMER (cameo)
Synopsis
Logan is freed from HAMMER custody by an agent who has a history with himself and Maverick. Wolverine uses an assault chopper to attack the oil rig where Strikeforce X is hiding out and blasts them all out of the water. Blackguard loses its shot at a contract that would allow them to make adamantium soldiers for the government. Agent Jacks deletes the intel that Blackguard used to make Strikeforce X which gets her into very hot water with her boss, Norman Osborn. Maverick tracks down the man who sold the Weapon X process to Blackguard and takes him out.
Reprints

Next (Table of Contents: 3)