First Line of Dialogue or Text
Wow! They were right!
Genre
horror-suspense 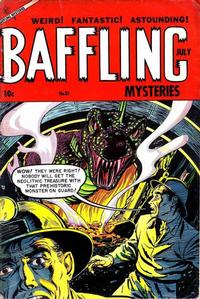 The Horror of Hillory Hill (Table of Contents: 1)

Genre
horror-suspense
Synopsis
The Hillorys seem to be a nice family - father, son and a mother confined to a wheelchair. But when night settles, people from the village die under gruesome circumstances. Because the Hillorys are a family of monsters.
Reprints

Genre
horror-suspense
Synopsis
"In the realm of the supernatural, no stranger tale of horror exists than that of Martin Londos, owner of a famous carnival that toured Europe in the early part of the century..."
Londos, cruel to his collection of animal freaks, is attacked by his creatures and transformed into a freak as well.

Genre
horror-suspense
Synopsis
The ballerina Maria Sandow comes into possession of magic ballet shoes. She becomes the most famous dancer in the world, but has to dance for the cult of the horned Walpurgis goat men as well. Maria dies in a final dancing frenzy.

Original indexer Saltarella suggested this could be Lou Cameron.

Genre
horror-suspense
Synopsis
"From the area around the Gulf of Mexico came a weird tale of two fishermen unequaled in the annals of the supernatural..."
One kills the other to get the boat for himself, but suffers a visit from his dead partner and goes overboard.

One of a series of 1-page stories about supposedly true encounters with the supernatural.
This story is a variation of the "Hand of Fate Mystery #18" from Hand Of Fate #16 (February 1953). There three fishermen were involved in quite the same plot.

Arm of Vengeance (Table of Contents: 5)

Genre
horror-suspense
Synopsis
Brutal and bitter hunter and safari tour guide Frank Meliss loses his right arm in a crocodile attack. Native wizard Lashim endows him with the arm of a gorilla. Meliss sinks down to a life of crime until he is caught and executed.

The Ghostly Chorus (Table of Contents: 6)

The text story is missing from the available scan on DCM.

Valley of the Mayan Goddess (Table of Contents: 7)

Genre
horror-suspense
Synopsis
Benedict tries to get rid of Bill, who has won the heart of the girl they both love. He shouldn't have chosen a mysterious valley in the Guatemalan jungle for his assault. The goddess of vengeance residing there sentences him to lose his mind, while Bill gets the girl anyway.
Reprints

Original indexer Saltarella suggested this could be George Roussos.