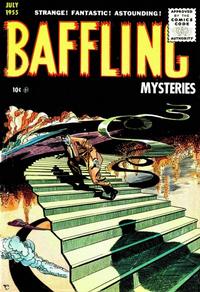 Genre
fantasy-supernatural
Synopsis
Boxer Pete Dunn is ready to win the lightweight championship. As his father dies, he promises him to win the fight and become champion. Dunn gets killed in a car accident, but manages to show up for his fight. He wins the championship, but vanishes in his dressing room. News arrive that Dunn has been killed. Everyone is quite baffled.
Reprints

Mark of the Cat (Table of Contents: 2)

Genre
horror-suspense
Synopsis
Ross Bridger visits a balkan land and a spooky castle. There he meets Chorta, a she-devil who can transform into a cat. Chorta wants Ross to be her prince of evil. Ross escapes but is followed to the United States. In a showdown on a stormy night he can lock out the cat.
Reprints

Story has been retouched to meet approval of the Comics Code Authority. In original story the cat is killed, for example.

Flee the Other Self (Table of Contents: 3)

Genre
horror-suspense
Synopsis
Paul Hulick is a gambler who cheats on his girl. He meets his doppelganger (who reveals himself as Hulick's conscience) and learns that he must die tomorrow (by drowning) unless he changes his behaviour. He does so but refuses to hand his conscience back its book of fate, so that he can change the death-entry. On the run he falls into an open manhole, but is luckily saved soon afterwards.
Reprints

Original title: "It Is Written: I Die Tomorrow!"

Story is heavily retouched to meet approval of the Comics Code Authority. The figure of Fate is removed and replaced by Paul Hulick's doppelganger (drawn by Louis Zansky). New hand-lettered text lines are strewn into the Leroy lettered original balloons. Originally Hulick falls into the manhole and drowns in the sewer.

Genre
fantasy-supernatural
Synopsis
"In the late 19th century, a certain captain Morgan and a friend arrived in London and sought lodgings for two nights..."
In the night, Morgan is harassed by a ghost bird. Not dumb, he lets his friend take the room for the next night. In the morning, the friend tells of the same experience.
Reprints

The numbering (#4) is erratic and arbitrarily. It is in fact a reprint of "True Tales of the Supernatural #12".
Only Ace horror comic book to contain one instead of two "fillers".

Secrets Behind the Bloodstains (Table of Contents: 5)

Night of Strangeness (Table of Contents: 6)

Genre
fantasy-supernatural
Synopsis
Nurse Jarvis encounters a mine foreman in the Pennsylvania hills, who leads her to a group of men, caught in a cave-in. They give her instructions about a hidden, rich vein. Reporting this event in town, she if baffled to hear that the cave-in took place ten years ago, all the men were lost and the mine expired. The nurse and the mine owner's son investigate and discover an entrance to the cave-in. They marry and strike it richly.
Reprints

Original title: "Terror in the Coal Pits." The terms “bizarre” and “insane” are eliminated in the last panel moral.