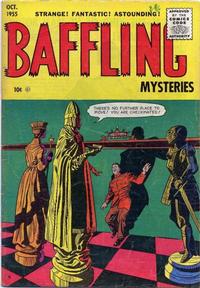 Prisoners in a Lost World (Table of Contents: 1)

Genre
adventure
Synopsis
Two explorers discover the underground kingdom of Xandia, hidden in the Himalayas. They are imprisoned and have to fight wild beasts. Only one of them can escape back to western civilization.
Reprints

What's the Answer to These School Problems? (Table of Contents: 2)

by National Citizens Commission for the Public Schools

Genre
fantasy-supernatural; war
Synopsis
"When the french army was fighting its toughest battle of World War I, tales of heroic ventures became almost commonplace..."
A lieutenant is killed leading an attack. His ghost returns to complete the task.
Reprints

Originally presented as one of the "True Tales of Unexplained Mystery." Presented as true stories. Feature abstains from traditional numbering.

The Lorelei of Loon Lake (Table of Contents: 4)

Genre
horror-suspense
Synopsis
The ghost of a drowned girl reveals what happened.
Reprints

Story has been reworked and censored (woman’s skeleton removed).

Genre
fantasy-supernatural
Synopsis
"One of the most fascinating sports in the world is skiing..."
American tourist in the Swiss alps witnesses nightly somersault ski jump of a man who injured himself a week before.
Reprints

Originally presented as one of the "True Tales of the Supernatural." Feature abstains from traditional numbering. Story has been reworked. In the original version the ski jumper had died a week ago.

The Phantom Model (Table of Contents: 6)

Genre
crime
Synopsis
A young lady seeks revenge on artist because of the one that jilted her mother.
Reprints

The text is doctored to avoid all references to death. The painter does not die, he just faints.

The Mummy's Curse (Table of Contents: 7)

Genre
horror-suspense
Synopsis
Egyptian Whodunit: Archeologist sets deadly trap for his employer by springing a mummy's poisoned ornament on him. Egyptian detective can put the blame on him.
Reprints
Keywords
monsters

6 Furlongs to Yesterday (Table of Contents: 8)

Original title: "The Haunted Horse." In the original version the son dies.