Although "Meet the Artist" feature is listed in the credits, it does not appear in this issue.
This issue has variants:

The Debut Issue of Batman (Table of Contents) 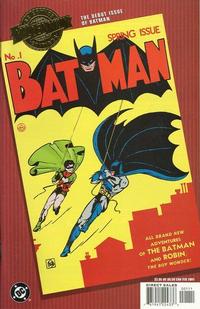 Batman #1 The Dynamic Duo Swing into Adventure (Table of Contents: 1)

The Legend of the Batman--Who He Is and How He Came to Be! (Table of Contents: 2)

[The Giants of Hugo Strange] (Table of Contents: 5)

Story is listed as "Professor Hugo Strange and the Monsters" in this issue's credits.

First Line of Dialogue or Text
In Egypt they say "How are you sweating"? instead of "How is your health"?
Genre
non-fiction
Characters
Popeye (parody); Bluto (parody); Olive Oyl (parody)
Reprints

The Joker Returns (Table of Contents: 11)

Sequence on back cover.