The Prize of Pizarro (Table of Contents)

Cover scene does not appear in the story. 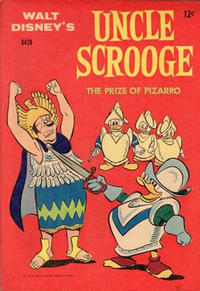 Walt Disney's Uncle Scrooge and the Prize of Pizarro (Table of Contents: 1)

First Line of Dialogue or Text
Down through the ages have come mysteries
Genre
adventure; anthropomorphic-funny animals
Characters
Uncle Scrooge; Donald Duck; Huey, Dewey; Louie
Synopsis
Scrooge finds a letter in an old Spanish galleon he has given to the city of Duckburg that reveals the location of the Incas' long-secret gold mines. The ducks make the hazardous journey into the Andes to the mines, where, unknown to them, descendants of the Incas are still on guard, and traps are plentiful.
Reprints
Keywords
Andes; galleon; gold; Incas

Job Number
[S 65001]
First Line of Dialogue or Text
I called you boys because I'm worried about that money level!
Genre
anthropomorphic-funny animals
Characters
Uncle Scrooge; Donald Duck; Huey; Dewey; Louie; Gyro Gearloose
Synopsis
Scrooge is upset that the money level in the Money Bin is slowly declining from 99 feet. He loans Donald $50 to find an investment that will bring in enough money to raise the money level. Donald spends the $50 at an auction on a trunk that is full of Easter Island figurines. The Junior Woodchuck's manual says that natives of Christmas Island think the figures bring good luck, so Donald and the nephews hitch a ride on Scrooge's plane to Christmas Island. They set up a trade in figurines from Christmas Island to Easter Island and vice versa and Scrooge makes enough money to enjoy life again.
Keywords
auction; Christmas Island; Easter Island; loan; Money Bin; Pacific

I.N.D.U.C.K.S. credits this story to Disney Studio (foreign market stories). Apparently this appearance is the only time it was printed in English. Its first printing was in Topolino (Arnoldo Mondadori Editore, 1949 Series) #501 (July 4, 1965).