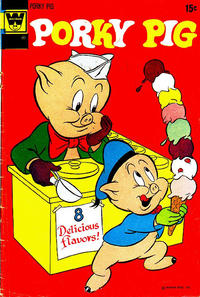 Twenty Thousand Leaps Under the Sea (Table of Contents: 2)

New story. Porky comments that “Hemo” is a bit of an unusual name, to which the captain replies “Well, it’s really Captain Blood! But history already had a character by that name, so I changed my name to Hemo!” Both good art and snappy dialogue make this story superior to the average 1970s Western Publishing fare.

The Runaway (Table of Contents: 9)

First Line of Dialogue or Text
“You’ll have to stay in your cage,” Tweety’s mistress said one day, “so you’ll be out of the way while I do my house cleaning.”
Genre
anthropomorphic-funny animals
Characters
Tweety; Tweety’s mistress; woman with the flowered hat
Synopsis
A bored and caged Tweety escapes to find excitement. He hitches a ride on a lady’s flowered hat, is taken aboard a bus, is confined to a restaurant’s locker with the hat, and must make his way home through a cold, heavy rain.
Reprints
Keywords
bus; cage; escape; hat; locker; quest for excitement; rain; series of mishaps; there’s-no-place-like-home

A rare story of Tweety without Sylvester, and where he has an owner other than Granny.

Jollying with the Jolly Roger (Table of Contents: 12)

First Line of Dialogue or Text
You’re a sharp one, Porky… Buying a pirate ship for only a hundred bucks!
Feature Logo