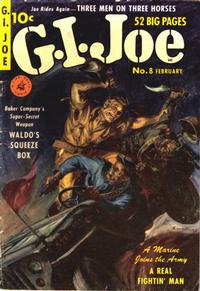 The Ice Boats (Table of Contents: 1)

Script credit from Shaun Clancy on the Facebook page "Comics History Exchange" where he posted a payroll stub (invoice number 8815) showing payment of $9.00 from Ziff-Davis to Silverman for the story (May 9, 2014).

Medal for Willie (Table of Contents: 2)

Rescue by Air! (Table of Contents: 5)

Souvenir for Sparks (Table of Contents: 6)

A Replacement (Table of Contents: 9)

Genre
humor; war
Characters
Wendy Wings; Major Paine; Flip
Synopsis
Wendy joins the WAF to take over a man's job, but once the Air Corps spotted her in uniform they wanted to take over the girl for whom no one could find a replacement.
Reprints
Keywords
jet; WAF; Women in the Air Force

Inking is exactly like the signed "DeCarlo/Lapick" on Yardbirds in #9.

Signed at left on accordion in panel 2.

Prizes for Everyone (Table of Contents: 15) (Expand) /