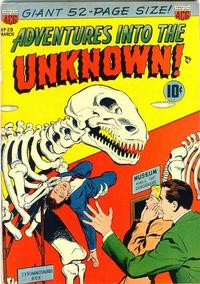 Invasion of the Ghost-Monsters (Table of Contents: 1)

Ship of Death (Table of Contents: 3)

Genre
horror-suspense
Characters
George Proctor; Mambo; Captain Krock
Synopsis
The S.S. Neptune seems to be an ordinary freighter, until the Captain decided to go to sea with a crew of Zombies.
Reprints
Keywords
Zombies

The Mark of the Monster (Table of Contents: 5)

For Startling Supernatural Stories ... It's the Terriffic Trio (Table of Contents: 6) (Expand) /

Statement of Ownership, Management, and Circulation (Table of Contents: 8)

The Hands of Darkness (Table of Contents: 9)

The Witches' Brew (Table of Contents: 10)