Joe Simon began editing for Timely on a freelance basis with Red Raven Comics #1, which came out the same month as this issue. It is not clear if he immediately started editing Marvel Mystery Comics as well or not, although he was definitely the editor by issue #12 as discussed in that index. 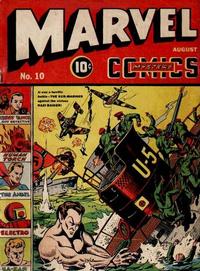 The Result of the Most Famous Battle in Comic Magazines (Table of Contents: 1)

Genre
superhero
Characters
The Human Torch [Jim Hammond]; Sub-Mariner [Prince Namor]; Betty Dean
Synopsis
Trapped in a translite tube, only the intervention of Betty Dean saves the Torch and ends the battle between him and Namor.
Reprints

Conclusion of the Human Torch/Sub-Mariner battle.

[The Ghouls of the Blue Ridge Mountains] (Table of Contents: 4)

Genre
superhero
Characters
The Angel [Tom Halloway]; unnamed girl; a band of ghouls (villains, introduction for all, all die); The Devils of the Mist (villains, introduction for all)
Synopsis
The Angel must cope with weird "devils of the mist," who have been released from the bowels of the earth by a volcano and who are kidnapping young women topside to sacrifice to the volcano.
Reprints

[Master of the Living Dead] (Table of Contents: 5)

Art credits added by Craig Delich 2008-11-23. As noted in the blog SangorShop, "Beach Allen" is probably a misprint for "Beech Allen", who had written various credits for Robert Erisman at Goodman' pulp division during the late 1930s. "Beach Allen" was the pen name of Hedwig C. Langer 2013-03-29

Genre
western-frontier
Characters
The Masked Raider [Jim Gardley]; Lightning (the Raider's horse); Jonathan Gregg (tax collector, death); Sally; un-named Sheriff; un-named crook (villain)
Synopsis
A criminal who has fatally wounded a tax collector sees the Raider and works out a scheme to convince the sheriff that the Raider is the murderer, all as a blind to steal the tax money himself.
Reprints

The Murder of a Man without a Will (Table of Contents: 8)

Genre
detective-mystery
Characters
Terry Vance (introduction); Dr. Watson (introduction, a monkey); Dr. Caldwell (death); un-named assistant of Dr. Caldwell; un-named fiancee of Caldwell's assistant; Gregory (villain, introduction, Caldwell's stepson)
Synopsis
While Terry Vance, the Boy of a Hundred Hobbies" works on an experiment, he hears a police call of someone murdered in a penthouse. Investigating, he discovers the man has been murdered by "remote control."
Reprints

[A Visit from Scotland Yard] (Table of Contents: 9)