Most copies of this issue have "JULY" somewhat blacked out but still readable on the cover with "AUGUST" displayed clearly right under the issue number. This has led to inconsistent reporting of the date of this issue. The indicia lists July.

With this issue, the Chesler connection vanishes, with even familiar features being drawn mostly by Funnies, Inc. which had been packaging Marvel Mystery Comics from the start. Some stories are of less clear origin as noted below.

Art spotting as noted in the Masterworks credits unless otherwise noted. 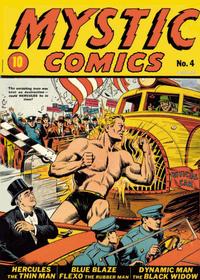 [The Trustees of Hate] (Table of Contents: 2)

Probably Chesler Shop material, as Who's Who lists a "Harry Douglas" as possibly a member of that shop c. 1939-40, independent of its other theories about the "Harry / Douglas" signature.

There is a teaser for a story in which the Blue Blaze fights the Vampire of Doom next issue, but that story never appeared.

Genre
superhero
Characters
Hercules David; un-named friend of Hercules; Lemo (villain, inventor, death)
Synopsis
Hercules fights a mad scientist who wants to rule the world or smash it to bits with his monster earth-shaking machine. The scientist captures Hercules and tries to mentally enslave him, but Hercules is too strong.
Reprints

[Origin of the Thin Man] (Table of Contents: 4)

Genre
superhero
Characters
Thin Man [Bruce Dickson] (introduction, origin); Council of Elders; Olalla (daughter of the Elder's Chief); un-named Police Commissioner; Clip Walton (villain)
Synopsis
Bruce Dickson stumbles on a utopia in the Himalayas and its people welcome him, granting him the power they all have to become exceedingly thin through surgery with their electric rays. He is shown their science and their peaceful communication with the Martians, but convinces them to let him return to the outside world to fight crime. The Elder's daughter, Olalla, goes with him and on their first adventure they put a stop to a protection racket.
Reprints

This story probably came from the Iger shop. Unlike other artists and writers seen in this issue, Klaus Nordling had no known connection to Funnies, Inc. Note that the Fletcher Hanks-drawn stories in Daring Mystery Comics (Marvel, 1940 series) around this same time also suggest an Iger shop connection.

[The Teutonian Agents] (Table of Contents: 5)

There is a teaser for another Flexo story in the next issue but it never appeared.

Genre
superhero
Characters
The Black Widow [Claire Voyant] (anti-hero, introduction, origin); James Wagler (death); Mrs. Wagler (death); Pat Wagler (death); Satan (villain)
Synopsis
Spirit medium Claire Voyant, momentarily influenced by Satan, curses a family after they doubt her skills. When the mother and daughter of the family die, the son blames Claire and kills her. Satan claims her soul and transforms her into the Black Widow. After giving her a tour of Hell, he allows her to go back to earth and avenge herself by killing her own murderer. Satan then tells the Black Widow that her role will be to collect the souls of evil men on earth at his direction.
Reprints

The Black Widow (anti-hero) is the first known super-powered woman in comics, predating Owlgirl, Hawkgirl and Wonder Woman, which all appeared in 1941.

Strip now titled "The Invisible Man". Several of Dr. Gade's speech balloons start with parenthetical notes like "(Thinking)" or "(Loudly)". There is a teaser for another Dr. Gade story in the next issue, but it never appeared. Next appearance in All-Winners Squad: Band of Heroes (Marvel, 2011 series) #1.
Funnies, Inc. material.

Characters
Dr. Karl Strang (naturalist); Tom Barron (big game hunter/explorer); Mannlicher (villain, a dinosaur, death)
Synopsis
Karl and Tom are on a journey in deepest Africa to find the natives' devil-god, and discover that a colossal dinosaur is the devil-god which has the natives living in fear.
Reprints

[The Train Wreck] (Table of Contents: 9)

The last panel shows a telegram to Merzah giving his address as "Mystic Comics, New York City NY".
Next appearance in All-Winners Squad: Band of Heroes (Marvel, 2011 series) #1.
Russ Lanford is not known to be associated with any of the studios that supplied material to Mystic Comics. This may have been freelance work, or we may just be missing the connection as this is his only known comics work.

Genre
superhero
Characters
Dynamic Man [Curt Cowan]; Chief Hopkins; Professor Monte (villain, death); Prentiss (villain, death)
Synopsis
Dynamic Man investigates jewelry store robberies in which only gold was stolen. He discovers a scientist who is using a "magnet" that affects only gold to commit crimes. The scientist uses his new dirigible with this magnet to steal more gold, and Dynamic Man must chase him across the Atlantic Ocean.
Reprints

The source of this story is unclear. Last golden age appearance. Next appearance in The Twelve (Marvel, 2008 series) #1

What Six Things Are Wrong with This Picture? (Table of Contents: 11)

Characters
Johnny; Dan
Synopsis
Single panel has six boys in different positions in the scene, and each scene has something wrong with it that the reader is invited to discover.
Reprints

First Line of Dialogue or Text
The boy is wrong!
Synopsis
Readers are invited to see if they can spot the seven hidden profiles of Indians in an art panel.
Reprints

Make Your Own Records at Home (Table of Contents: 13) (Expand) /

The Leading Comic Magazine Now at Your Newsdealer! (Table of Contents: 14) (Expand) /