Red Raven Comics was Joe Simon's first assignment as a freelance editor for Timely after he left Fox. No blurbs at the end of the stories in this issue indicate that there will be a Red Raven Comics #2. Instead they all advertise either Marvel Mystery Comics or in one case Mystic Comics, suggesting that perhaps Red Raven Comics was cancelled even before it went to press.

First Line of Dialogue or Text
Out of the skies swooped a powerful figure...
Genre
superhero
Characters
Red Raven
Reprints

Art credits from Greg Theakston. The central figure with the sword was swiped from a Hal Foster Prince Valiant strip. The first Jack Kirby cover work. Letterer credit by Greg Theakston in "The Complete Jack Kirby Volume One 1917-1940", page 166. 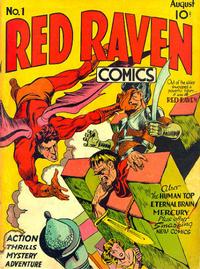 [The Origin of the Red Raven] (Table of Contents: 2)

In the spot where the "next issue" blurb usually appears there is instead a blurb for the Human Torch vs Sub-Mariner battle in the upcoming Marvel Mystery Comics #9.

[The Origin of the Human Top] (Table of Contents: 3)

Genre
superhero
Characters
The Human Top [Bruce Bravelle] (introduction, origin); Martha Davis (introduction); Horace Vanderveer (villain, introduction)
Synopsis
A scientist is experimenting on Bruce Bravelle with electricity when lightning strikes, giving Bruce the ability to become a Human Top. He dons a costume and thwarts a bank robbery, but is then accused of being a thief when the head of the bank fails to re-deposit the money that the Top returned to him.
Reprints

next appearance in Tough Kid Squad (Marvel, 1942 series) #1
The "next issue" blurb instead tells the reader to follow their favorite characters every month in Marvel Comics.

Mercury in the 20th Century (Table of Contents: 4)

A small "next issue" blurb promotes the Human Torch vs. Sub-Mariner battle in Marvel Comics.

The Death Switch (Table of Contents: 5)

First Line of Dialogue or Text
Time may change civilization, custom and speech, but it can never erase man's craving for adventure and thrills...
Genre
science fiction
Characters
Comet Pierce (introduction); Avis Jort (villain, introduction); Queen Larania (introduction); Murfi (introduction)
Synopsis
After Comet Pierce crash-lands on an asteroid during a race, he is rescued by a mysterious woman who gifts him with a powerful new engine and declares her love. After winning the race, Comet sets out to search the solar system for his beautiful benefactor.
Reprints

The space for the "next issue" exhorts the reader to buy Mystic Comics #4 instead.

Re-Creator of Souls (Table of Contents: 8)

Genre
superhero
Characters
Magar (introduction, origin); Solomon (ghost); Mata Hari (ghost); Houdini (ghost, spelled Houdine); Napoleon (ghost); Wellington (ghost); Thomas Edison (ghost, spelled Edisan)
Synopsis
Having gained the power to summon the ghosts of the dead to aid him, Magar sets out to end the wars he sees raging around him. Solomon advises him to aid the cause of Democracy, Mata Hari spies out the enemy plans, Houdine helps Magar escape, and Napolean, Wellington and Edisan help the Allies defeat their enemies.

A panel-sized "next issue" blurb instead advertises "The Battle of the Comic Century! FIRE vs WATER" in Marvel Comics, with head shots of the Human Torch and the Sub-Mariner.

First Line of Dialogue or Text
Emulating the experiments of Col. Charles Lindbergh, a half-century after the air hero had experimented with mechanical substitutes for human organs, Prof. Carmody is reaching completion of his life's work when...
Genre
science fiction
Characters
The Eternal Brain [Professor Carmody] (introduction, origin); Mary Carmody (his daughter, introduction; Jim (his assistant, introduction); Peg-Leg Martin (villain, introduction, death), The Mongolian Emperor (villain, introduction, death)
Synopsis
Professor Carmody is fatally wounded when Peg-Leg Martin's men abduct his daughter Mary to be a slave of the Emperor of Mongolia. The professor instructs a reluctant Jim to operate on him, and he becomes the Eternal Brain. Using his new abilities to see around the globe, the Brain locates Mary and sends Jim to rescue her, but Mary is furious with Jim for turning her father into the Eternal Brain.

Make Your Own Records at Home (Table of Contents: 10) (Expand) /