175 Fifth Avenue New York, NY Printed in Canada. Intended to be the third Media Publications title? The first issue shows Andru/Esposito involvement. None of the others do. Apparently the ownership change occurred while the issue was in production. 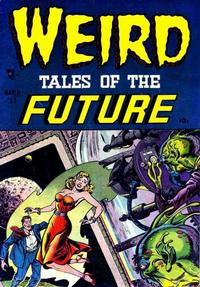 Genre
science fiction
Characters
Jerry Drago; Jill Johnson
Synopsis
Jerry Drago and Jill Johnson are abducted by a Venusian Doctor as Earth specimens. The doctor increases their life spans to an indefinite length. Jerry and Jill escape in a stolen rocket and return to Earth. Nobody believes their story, and the rocket disappears. The pair begin to use the Venusian technology they observed to improve the lot of mankind.
Reprints

Intended as the first of a series.

The Ghouls Who Ruled the World! (Table of Contents: 2)

Genre
science fiction
Synopsis
In the year 2042 a group of gangsters are restored to life by a gamma life ray.
Reprints

The Time Has Come (Table of Contents: 4)

Genre
science fiction
Characters
Alan Moore (intro); Professor Manheim (intro); Professor Fenrir (intro); Desua (intro); Jana; High One, Ruler of Moon Men
Synopsis
Alan Moore sets forth on a journey to the Moon in a spaceship designed by Professor Manheim. He is surprised to see another spaceship. It belongs to space pirates led by Jana. Jana has captured Professor Fenrir and his daugher, Desua. Jana tells the High One, ruler of Moon Men, that the prisoners are spies. Fenrir convinces the High One that Jana is lying. The Ruler of Moon Men has Alan Moore fight Jana. The lower gravity of Earth gives him the advantage over Jana. Moore returns to Earth with Jana's ship and Fenrir and Desua in tow, planning to return them to their planet.
Keywords
lunar people; space pirates

Trip Into Space (Table of Contents: 5)

Survival of the Fittest (Table of Contents: 6)