This issue is a variant of Alpha Flight (Marvel, 1983 series) #28 [Direct]. There exist further variants.

[As if the Beyonder wasn't bad enough...] (Table of Contents) 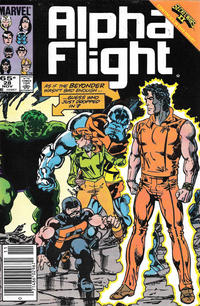 Genre
superhero
Characters
Alpha Flight [Heather McNeil Hudson; Shaman; Snowbird; Puck; Aurora; Northstar; Talisman [Elizabeth Twoyoungmen]; Box [Walter Langkowski]; Roger Bochs]; Madison Jeffries; Omega Flight [Guardian [Delphine Courtney]; Wildchild; Diamond Lil; Flashback]; Beyonder; Hulk [Bruce Banner]
Synopsis
Omega Flight tries to escape from their encounter with Alpha Flight but run into Madison Jeffries in the parking lot of the mall and he dispatches them singlehandedly. The Beyonder has rescued Talisman from Shaman's medicine pouch (in Secret Wars II #4), but Elizabeth is really angry with her father and magically sends the team back to their base without her. Roger Bochs "hooks" what looks to be a more suitable body for Walter than the Box robot but, unfortunately, the body already belongs to the incredible Hulk.
Reprints
Keywords
Secret Wars II