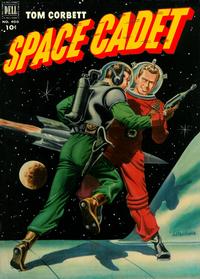 Inside front cover; black and white. Figures of the three main characters cropped from a photograph and typeset text.

First Line of Dialogue or Text
The usual day of study is interrupted at Space Academy...
Genre
science fiction
Characters
Tom Corbett; Roger Manning; Astro the Venusian; Alfie Higgins; Capt. Steve Strong; Dr. Dale; Commander Awkright
Synopsis
The Space Cadets are on a training mission on the passenger spaceliner "Prince of Centurus" when it is attacked and boarded by space pirates. The pirates take the cargo and also take the passengers and crew to work in the mines of Mercury. Tom, Astro, and Roger secretly slip back into the crippled and abandoned spaceliner and send a distress call that is picked up by the Solar Guard patrol. Commander Arkwright then uses the rescued cadets to spring a trap on the pirates.
Reprints

Story continues on inside back cover in black and white and concludes on back cover in color. Script credit from Robin Snyder, taken from Paul S. Newman's personal records (July 22, 2007).