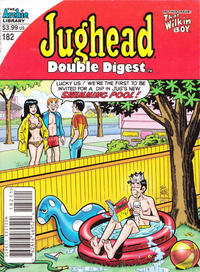 Your Humble Serpent or: The Beast from One Fathom (Table of Contents: 2)

The Long Drink of Water (Table of Contents: 4)

The Sweet Story (Table of Contents: 5)

The Critic (Table of Contents: 6)

From Thirst to Worst (Table of Contents: 10)

Genre
humor
Characters
Jughead Jones; Archie Andrews; Veronica Lodge; Pop Tate
Synopsis
Archie has no money to take Veronica out on a date and asks Jughead if he can borrow some from him.
Reprints

Critic at Large (Table of Contents: 28)

Page 4, Panel 4, Veronica's text has been altered from the original, updated to say "He could be the next Justin Bieber."

Illustration used as the title page of the next section featuring That Wilkin Boy reprints.

Genre
teen; humor
Characters
Bingo Wilkin; Samantha Smythe; Sampson Smythe
Synopsis
Suddenly Bingo has so much strength that he can lift any barbells without trouble, while the Smythes are weak by comparison. Or is this all a dream?
Reprints
Keywords
weight lifting

If The Fitness Fits (Table of Contents: 38)

Feature changed from Betty to Jughead for this printing.

The Tenderfoot (Table of Contents: 39)

Genre
teen; humor
Characters
Jughead Jones; Archie Andrews; Reggie Mantle
Synopsis
While at the beach, the lovely ladies won't give Archie or Reggie a second glance. But they're more than happy to help Jughead, who keeps burning his feet while trying to cross the hot stand in order to get to the Snack Shop.
Reprints

New Kids Off the Wall Part One (Table of Contents: 41)