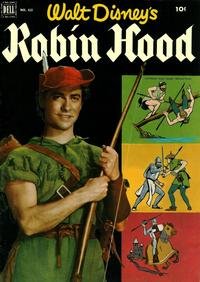 Adaptation of the Walt Disney motion picture, "The Story of Robin Hood and his Merry Men". According to Mark Evanier the art is early Mike Sekowsky (Walt Disney's Comics Digest (Gladstone, 1986) #6). Alberto Becattini: This is not Mike Sekowsky. It seems that Jon Small did the layouts and part of the pencilling (and inking). Most of the characters' faces, though, are 100 % Gollub. Script submitted on April 18, 1951. Script credit provided by David Porta from "Gaylord Du Bois's Account Books Sorted by Title / compiled from the original account books by Randall W. Scott" (1985).

Maid Marian Is Rescued from the Dungeon (Table of Contents: 3)