The Return of Zorro (Table of Contents) 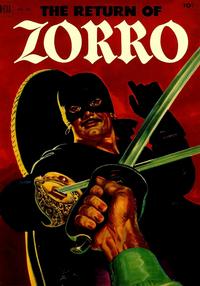 Inside front cover, fact page on swords; text and illustration. Pencils and inks credits for this sequence from Alberto Becattini (May 14, 2007).

Fencing was an art in Spanish California just as it was in the Old World. Gentlemen spent inordinate amounts of time learning the various moves necessary to become an expert fencer. Three different weapons of choice: the sabre, the court sword, and the rapier are illustrated and discussed in detail.

The Return of Zorro (Table of Contents: 2)

In a post to the Timely-Atlas-Comics Yahoo group on 13 February 2014, Jim Vadeboncoeur Jr. disputes the original indexer's credit of the art to: Bob Fujitani ?; John Prentice ?

Zorro reveals his identity as Don Diego at the end of the story.