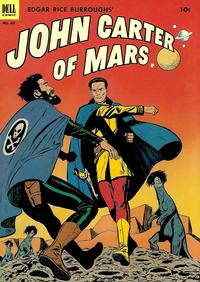 Inside front and back covers; black and white. Illustrations with hand-lettered text.

The Black Pirates of Omean (Table of Contents: 2)

Genre
science fiction
Characters
John Carter; Tars Tarkas; Xodar; Phaidor; Issus (villainess); Dejah Thoris; Thuvia
Synopsis
After ten years away from Mars, John Carter is finally able to return and finds himself in the Valley Dor, where every Martian comes at the end of life. When savage plant men attack three Tharks. John is able to save one, who coincidently is an old friend, Tars Tarkas. John and Tars escape the plant men through a passage that leads them into the city of the Therns. There they rescue a slave girl, Thuvia, and learn the Therns are being raided by the Black Pirates of Omean, who have captured Dejah Thoris, John's wife on Barsoom. John takes over a pirate cruiser where Phaidor, the princess of Thern is held. After John defeats the pirate captain Xodar, the three go to the Temple of Issus deep under the South Pole of Mars. There John rescues Dejah Thoris and Thuvia, causes the death of the evil goddess Issus, and helps start a slave revolt in Omean. Xodar takes control of the rebellion while John and his friends (including Tars Tarkas) escape to the surface.
Reprints

The first two-thirds of the story is a fairly-faithful adaptation of the 1913 John Carter story "The Gods of Mars" by Edgar Rice Burroughs. The final third of the story condenses and changes some plot points in order for the story to end happily. In the original there is a cliff-hanger which is followed up in the next story "The Warlord of Mars". Phil Evans is credited for the story in Robin Snyder's The Comics.