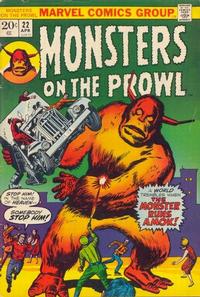 When the Monster Strikes! (Table of Contents: 1)

Job Number
[V-465]
Genre
science fiction
Characters
Jason Burke; Clara Burke; X-13
Synopsis
An inventor builds a robot, but finds his neighbors terrified by its monstrous appearance. The robot pretends to go on a rampage and is dropped into the sea. It leaves a letter saying that it will emerge when humanity learns tolerance.
Reprints

Since the splash page was used as the cover a new splash was drawn with art possibly by Buckler/Esposito. The title was also changed from the original, "When The Thing Runs Amok" to avoid confusion with their popular character.

The Wax People! (Table of Contents: 2)

Job Number
V-468
Genre
horror-suspense
Synopsis
The mannequins in a store come to life in a creepy atmosphere as it closes. However, this is not thought odd by anyone, because on this alien world all people are made of wax, and some work as mannequins, but leave with everyone else at closing.
Reprints

Less Than Human (Table of Contents: 3)

Job Number
[V-284]
Genre
science fiction
Characters
John Harris; Alice Harris; Billy Harris; Roby the Robot
Synopsis
A strident anti-robot activist is convinced of the worth of robots when his son is saved by his robotic playmate.
Reprints

Trapped in the Room of Shadows (Table of Contents: 4)

Genre
horror-suspense
Characters
Sanford Kindwell; Kroger
Synopsis
A kind millionaire finds the first of two magical wishing stones with which he hopes to help all humanity. His greedy guide steals the stones and leaves him trapped, but his wish backfires and leaves the guide trapped and the millionaire is freed to search for the second stone.
Reprints