New logo designed by Gaspar Saladino, according to Todd Klein at his blog at kleinletters.com. 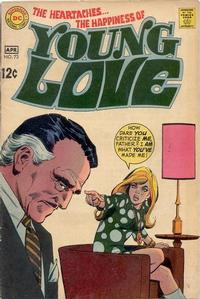 Genre
romance
Synopsis
When Gabe and Elise meet again after several years, she gives him another chance to date her, but he seems to be as undependable as ever.
Reprints

Some re-inking to update hairstyles and other details.

When Love Has Gone (Table of Contents: 2)

Genre
romance
Synopsis
Val is reluctant to tell Mark she doesn't love him anymore, but when he tells her the same thing she is furious. They reconcile when they realize they had just been taking each other for granted.

First Line of Dialogue or Text
I don't think I've ever seen my kind of problem in your column.
Synopsis
relationship advice

Genre
drama; romance
Characters
Lisa St. Claire; Dirk; Jonathan St. Claire
Synopsis
Lisa continues to deceive Dirk about his artwork (which she is secretly buying) and her family (she has servants posing as her parents). When her real father arrives unexpectedly at one of the "family" dinners, Lisa is surprised when he does not expose her and introduces himself to Dirk as Lisa's uncle.
Keywords
soap opera