A Little Kiss for Big Sister! (Table of Contents) 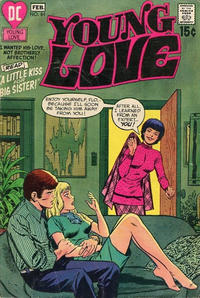 A Little Kiss for Big Sister! (Table of Contents: 1)

Job Number
J-733
Genre
romance
Characters
Flo; Ralph Wilson; Jan
Synopsis
Flo falls in love with her sister Jan's boyfriend Ralph, and since she's the nicer of the two, she eventually gets him.

A Proud Goodbye (Table of Contents: 3)

Some re-inking to update hairstyles.

Job Number
J-976
First Line of Dialogue or Text
My name is Monica K. and I am sixteen years old.

Job Number
J-709
Genre
romance
Characters
Skip Adams; Jen; Lisa; Connie
Synopsis
Jen has always blamed Skip for her sister's death, but when she finally learns that he was not responsible, she finds herself falling in love with him.

Job Number
J-720
First Line of Dialogue or Text
Just met a groovy guy, is that it?
Genre
fashion