[Don't Let Her Fool You] (Table of Contents) 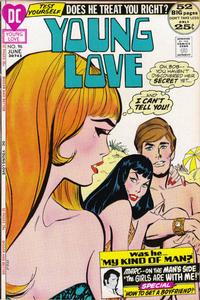 My Kind of Man (Table of Contents: 1)

Job Number
D-731
Genre
romance
Synopsis
Cathy is drawn to Paul, the new man in town, but when everyone learns that he left the Army as a conscientious objector they judge him a coward, and Cathy doesn't know if they can be together.

Does He Treat You Right? (Table of Contents: 2)

Don't Let Her Fool You (Table of Contents: 4)

Job Number
D-714
Genre
romance
Synopsis
Gloria's roommate Nora uses Gloria's boyfriend Allan to make her own boyfriend jealous, and Allan gets angry at Gloria when she points it out. When Nora tries the same trick with another guy, Gloria is reluctant to tell him what's going on.
Reprints

Original title: "My Rival's Secret!" Some re-inking to update hairstyles and other details.

Job Number
D-849
Genre
romance
Synopsis
A kind and considerate guy like Peter is always better than a brash and conceited show-off like Dirk.
Reprints

Original title: "Leave Me, Leave Me!" Some re-inking to update hairstyles and other details.

Marc - On the Man's Side! / letters page / 1 page (report information)

Job Number
D-925
First Line of Dialogue or Text
Dear Marc: No girl has the right to tell...

Teach Me to Love (Table of Contents: 7)

Job Number
D-712
Genre
romance
Synopsis
Insecure Jeannie doesn't believe that she's pretty or interesting, so she doesn't know how to behave when Kirk becomes interested in her.
Reprints

Original title: "Too Late for Tears!" Two pages deleted from the original story; some re-inking to update hairstyles and other details.

How to Get a Boyfriend (Table of Contents: 8)