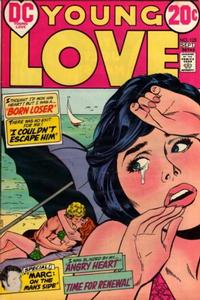 Job Number
D-161
Genre
romance
Synopsis
When Sally falls in love with her employer, Dr. Steve West, she fears that he will be taken away from her by one of his rich patients.
Reprints

Writer's credit from Robin Snyder's "Preliminary Look at the Works of Robert Kanigher."

A Dramatic Break-Thru from... the Line of Super-Stars! (Table of Contents: 2) (Expand) /

Time for Renewal (Table of Contents: 3)

Job Number
D-155
Genre
romance
Synopsis
Terry grieves for Charlie, her boyfriend who was killed in the war, until one of his Army buddies comes to tell her that Charlie wanted her to move on and find love again.

Pencils and inks credits from Nick Katradis via the GCD Error Tracker. Nick owns pages from the original art. The previous indexer credited the inks to Jack Abel.

I Couldn't Escape Him! (Table of Contents: 6)

Job Number
D-1039
Genre
romance
Synopsis
Nick keeps away any boy who is interested in Claudia which she finds unacceptable, but when she learns his real reason for this behavior she changes her mind.
Reprints

Job Number
R-137
Genre
romance
Synopsis
When Wilma and Jeremy begin dating, each is intending to teach the other a lesson but they end up falling in love.