Love Behind Bars! (Table of Contents) 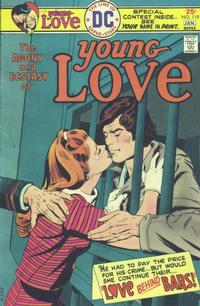 The Captive Commissioner (Table of Contents: 1)

Love Behind Bars! (Table of Contents: 2)

Job Number
R-290
Genre
romance
Synopsis
Stephie's boyfriend Vic goes to prison for auto theft, and she has to decide whether to go back to him when he is released.
Reprints

Initial information for this sequence provided by Steve Saaf. Pencils and inks credits confirmed by Nick Katradis via the GCD Error Tracker from the original art.

Readers are asked to write and advise the heroine of this story.

Job Number
G-937
First Line of Dialogue or Text
When Cleopatra was a girl...
Genre
non-fiction

Like It Really Is / comic story / 1 page (report information)

Job Number
B-846
First Line of Dialogue or Text
Like wow!
Genre
romance
Synopsis
A guy plots to meet a girl who's walking a dog but things don't work out as he hoped.

Tarzan Discovers the Land of the Prehistoric Animals (Table of Contents: 5)