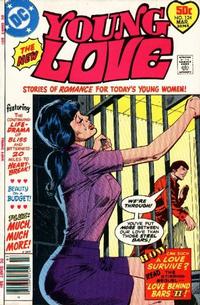 Job Number
J-4436
Genre
romance
Synopsis
Frightened of her own feelings, Stephie runs away when Vic gets out of prison. When she arrives in New York City, her wallet is stolen and two people who pretend to help her instead take her to a house of prostitution, where she is arrested in a raid. Released the following morning, she is surprised to find that Vic has come to bring her home.

I'm Going with a Stuntman... and It's Driving Me Crazy! (Table of Contents: 4)

Art credits from Nick Katradis and David Roach via the GCD Error Tracker.

Shadows in the Past! (Table of Contents: 7)

Job Number
J-4550
Genre
romance
Synopsis
Marni is crushed when her summer boyfriend Don marries someone else. Don returns to town after after his wife has died unexpectedly, but Marni knows he hasn't recovered from his loss.

Art credits from Nick Katradis and David Roach via the GCD Error Tracker. Inks formerly credited to Vince Colletta. According to the original art, this story was "written off," so it may have been in inventory for a while.

Job Number
J-4542
Genre
romance
Synopsis
Shy Cindy works on the classified section of the school paper and inserts anonymous messages to Marty, the handsome editor, who can't guess the identity of his secret admirer.

And Now... We Interrupt This Comic to Bring You a Word from Your New Publisher... (Table of Contents: 9)

Genre
biography
Synopsis
Jenette Kahn introduces herself to DC comics readers. Includes a note from Jack Adler regarding the illustration of Kahn by Adams.

Job Number
J-4551
Genre
romance
Characters
Melanie Winters; Juan Ricco; Roger Winters; Monica Winters; John Winters; Bob Anderson
Synopsis
Melanie's family is shocked when her sister Monica, the black sheep of the family, returns. Monica tells Melanie that she will see that Juan is acquitted of the false charges against him, and turns to their stepfather's brother John, the lawyer in the case. Juan wins the case and Melanie impulsively hugs him, to the horror of her mother.
Reprints

Story continues in the following issue. Juan's last name has been changed from Perez to Ricco, and Roger's from Bryan to Winters.

Job Number
J-4388
First Line of Dialogue or Text
I was the head cheerleader at our school.
Genre
romance
Synopsis
A cheerleader meets the captain of the opposing basketball team and goes out with him despite the advice of her friends.