His Brother's Love! (Table of Contents) 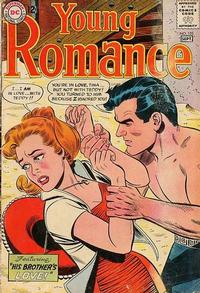 Intruder of Love! (Table of Contents: 2)

First Line of Dialogue or Text
You'll ruin your health with this constant running around!
Genre
romance
Characters
Aunt Jane; Tim Hall; Greta Hall; Pearl Arlen
Synopsis
Pearl runs away to the little upstate town of Garth City after 'discovering' that her fiance had a wife and child at home. She stays at a boarding house with an old woman confined to a wheel chair with the reputation of being a busybody. Pearl resents the woman's attempts to pry into her reasons for running away, but forgives her when the lady discovers that the Mrs. Hall she had met at Tim's house was the wife of Tim's brother.
Keywords
wheel chair

Previous indexer posited Doug Wildey as artist on splash page but it is signed by Pike.

First Line of Dialogue or Text
T-Ted will tire of me... as he did of all the other girls who loved him!
Genre
romance
Characters
Ted Minton; Janet McCrea; Sue; Madge Smith; Mr. Vanelli
Synopsis
Ted is Corville High's big heartthrob, but he never lasts long with any girl. When Janet learns of his reputation, she decides going out with him would be great fun while it lasted as long as she realized nothing permanent could come from dating him.
Keywords
school drama society

Illustration and backgrounds on two young women with their likenesses drawn by John Romita.

First Line of Dialogue or Text
You... you want me to go away with you?? But... what about...
Genre
romance
Characters
Charlotte; Eric; Meg
Synopsis
Meg's older sister had been like a parent to her for the past five years and she valued her sister's opinion, but Charlotte didn't approve of Meg getting serious with Eric. When Meg comes home from work earlier than expected one night, she sees Eric asking Charlotte to come away and marry him. But Eric was only doing it to show Meg that Charlotte was just jealous of her.
Reprints

His Brother's Love! (Table of Contents: 7)

First Line of Dialogue or Text
...I am in love... with Teddy!
Genre
romance
Characters
Teddy Brennan; Tina; Gordon Brennan
Synopsis
The Brennan boys moved next door to Tina when she was thirteen. Over the years the older brother was always cold and aloof toward her, but Teddy was always friendly. She convinced herself that it was Teddy she loved, but when Gordon confronts her after she sees Teddy with another girl, she discovers that she is angry with Gordon and hasn't even missed Teddy.
Reprints