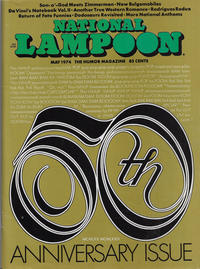 Too Many Chiefs? (Table of Contents: 2)

Page 8 on tan newsprint. A parody of editorial cartoons, using as many American Indian cliches as possible.

Pages 25-28. To be continued. According to the editorial in the next issue, pages two and three were printed out of order.

Genre
religious; satire-parody
Characters
Son-o'-God [Bennie David]; Zimmerman [Bob Dylan]; Devoted Dozen; Moishe Dayan; Golda Meir
Synopsis
While leading his Devoted Dozen though the desert, Son-o'-God has once more died. His body is brought to Jerusalem and put on display in the Zionist War Museum. The Devoted Dozen break into the museum and revive him. The Messiah is welcomed in the Holy City by everyone except Bob Dylan, who becomes the spirit Zimmerman to oppose him.
Keywords
Israel; Jerusalem; motorcycle; resurrection; Wailing Wall

Pages 31-36. To be continued. No credits for this sequence anywhere in the issue. Comic book parody. Color cover and fake ad (132,000 pc. Roman Catholics Set) on slick paper, and four page color story on newsprint.

Eight Comics in One! (Table of Contents: 6)

Page 63. Part of the "A. U. T. B. D Newletter" (Americans United To Beat the Dutch) on tan newsprint. The whole feature is credited to Christopher Cerf and Henry Beard, with no indication who wrote what.

First Line of Dialogue or Text
In past issues, we've told you how the Dutch have been killing our Elm trees...
Genre
advocacy; satire-parody
Synopsis
How the Dutch are destroying America's morals.
Keywords
Dutch; propaganda; stereotypes

Page 65-65. Part of the "A. U. T. B. D Newletter" (Americans United To Beat the Dutch) on tan newsprint. The whole feature is credited to Christopher Cerf and Henry Beard, with no indication who wrote what.

Page 70. Dialogue is all in Olde English.

[An Unsettling Tree] (Table of Contents: 10)

Genre
humor
Synopsis
A road is cut through the middle of a huge tree. A woman in a convertible is unsettled when she notices a penis and testicles hanging from the top of the cut-out.
Keywords
tree

Page 83. Cartoon is not signed.

First Line of Dialogue or Text
It is illegal to insult deaf women in all but fourteen states.
Genre
humor
Synopsis
A deaf woman is in a bar in Utah when she thinks she has been insulted.
Keywords
bar; deaf; Utah

Return of the Dodosaurs (Table of Contents: 12)

First Line of Dialogue or Text
Remember how different really old people were...
Genre
humor; children
Synopsis
The boy's grandfather teaches him how to chop wood and how to build a fire.
Keywords
chopping wood; teaching

First Line of Dialogue or Text
SukSuk Sun, if we both one in da whole, all, how come I go to pole and don't get to goof?
Genre
humor
Characters
Cheech Wizard; SukSukSun; Guru Eartheye
Synopsis
Guru Eartheye and SukSukSun make a pilgrimage to the swamp to see Cheech Wizard.
Keywords
pilgrimage; swamp

Page 95. Part of a continued story.

First Line of Dialogue or Text
I'm not afraid of nothing!
Reprints