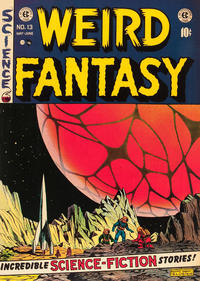 Genre
science fiction
Characters
Lon Masterson (scientist); Edith Fuller (Masterson's assistant); Henrietta Masterson (Lon's wife); Colonel Curtis
Synopsis
Dr. Masterson is attempting to solve a problem for the Space Colonization Authority in regards as to how to get live animals to distant planets for colonists to use as food. He hits upon the only way possible: to quick freeze them for transport. When the doctor falls in love with his assistant (and his wife will not agree to a divorce), he decides to quick freeze Ellen and transport her to a far distant colony where both will remain forever.
Reprints

Swipe of Ray Bradbury's "Kaleidoscope" and "The Rocket Man"; this story led to the arrangement for EC to adapt Bradbury's stories