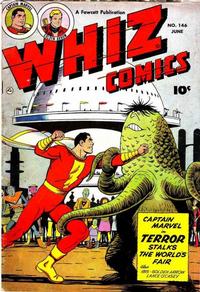 Ironed Out (Table of Contents: 2)

How to Grope for Bathtub Soap (Table of Contents: 3)

The Secret of the Hollow Hilt (Table of Contents: 5)

Moreira and Cataldo can be hard to separate. Here, the puppet-like figure movement and horses are all identical to Cataldo's signed story "Lefty Jim-U.S. Marshal" in Crown Comics (McCombs, 1946 series) #16.

The Menace of Lost Island (Table of Contents: 6)

Art similar to credited work by Ramsey in issue #136. Compare faces, close up heads in sideview and hands.

Peril from the Pyramids (Table of Contents: 11)