JV notes some simlarities in the background figures to Lee J. Ames. Curious. 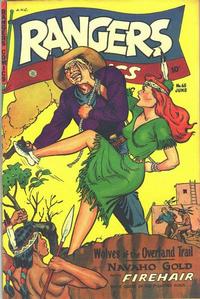 Lubbers was responsible for the faces in the original. Backgrounds have been added here by a new artist - probably part of the Iger Shop. There is no relation in EITHER story to "Navaho Gold" - the title shown on this cover.

They didn't even get the "A.E. Carruthers" house name correct.

Men on Other Worlds (Table of Contents: 5)

Appears to be material reprinted from various Planet stories with some new unifying text added. Possibly some of this is early Murphy Anderson.

First Line of Dialogue or Text
It started in California...at the Simplex aircraft...
Genre
crime
Reprints

First Line of Dialogue or Text
Saddle-Rock Mesa. Up in the hills back of...
Genre
western-frontier
Characters
Cowboy Bob
Reprints