The Thing in the Sewer!/The Man with the Whip!/Trapped by the Dead!/The Glass Eye! (Table of Contents) 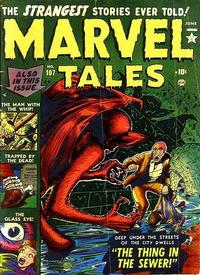 The Thing in the Sewer (Table of Contents: 1)

Job Number
A-73
Synopsis
A vampire fears a murderer's knife until he realizes that it is steel, not silver.

The Strangler! (Table of Contents: 2)

The Man With the Whip (Table of Contents: 3)

Job Number
A-125
Synopsis
A three-eyed, fanged freak is kept locked in the dungeon, but the boy has a normal mental development and so he hates his guardian. When the guardian forgets to lock him in, he takes the opportunity to kill the man as he sleeps. He resolves to go forward into the world to discover what it has to offer.

Statement of the Ownership, Management, Circulation, Etc. (Table of Contents: 4)

A story similar to the Twilight Zone's "The Hitchhiker"

The Glass Eye (Table of Contents: 6)

Trapped By the Dead! (Table of Contents: 7)

Job Number
A-39
Synopsis
A man kills a wealthy relative whom he closely resembles to take his place. He resolves to tear down the old house and use some of the money to rebuild, but discovers to his regret, the reason his victim was wealthy in the first place was that he had murdered his business partner ten years ago and stashed the body in the wing of the house that the workmen had just exposed.