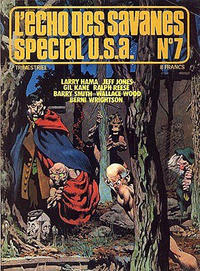 Genre
horreur-suspense (horror-suspense)
Synopsis
Joe Lowrey escapes from prison and flees into a swamp, where he finds a man who claims to have been part of Ponce de Leon's expedition to find the Fountain of Youth hundreds of years earlier. Lowrey drinks the magic waters and turns younger himself, then kills the other man planning to profit from the discovery, but he finds that he can't leave the swamp or the rejuvenation wears off.
Reprints

Job Number
8773
Genre
horreur-suspense (horror-suspense)
Synopsis
A scientist uses a projector that banishes people he dislikes to another world. A light indicates where the beam connects both worlds and one of the men returns. He shoves the scientist through the aperture where he is killed by the natives. Other victims rush forward hoping to escape but the man switches off the device. The story ends with the man uncertain what to do: turn the beam on and rescue the other victims which might allow the attackers to pour through, or shut it off and condemn them to die. He addresses the reader directly, asking "What would you do?"
Reprints

Genre
horreur-suspense (horror-suspense)
Synopsis
Jim Staton finds refuge in a deserted house during a storm, or so he thinks.
Reprints